As we build up to the launch of the WW1 Sikh Memorial at the National Memorial Arboretum in late March 2015, we’re releasing some of the articles that will feature in our souvenir publication.

Today’s guest contribution is from Mark Bibby, the sculptor of the memorial who describes below his process in creating an everlasting memorial in memory of Sikhs. 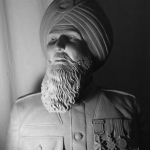 Having for over thirty years studied British military history, and with my sculptures displayed in private collections; I developed a lifelong fascination with the image of the proud Sikh soldier.  So it was an honour to be commissioned to create the World War One Sikh Memorial.

Research is vital when sculpting military themes, for me this begins by reading regimental histories covering the period the sculpture portrays, then gathering images of the subject – but remembering never to work from just the one image.  The internet is an aid with specialist websites such as ”Sikhs At War” but so too are living history groups and collectors, that research the minutia of their subject.

Once details of the figure (size, shape etc) have been confirmed any any queries regarding material, production rechecked, the creative work begins.  Sketching ideas helps imagine what it should look like – before moving on to a Marquette, a small model used to give an idea of how the finished sculpture will look.

Beginning work on the actual sculpture an armature has to be created, a solid wooden metal frame.  Any mistakes at this point would cause major problems later.  And so surrounding myself with reference photos, sketches and notes I start with the face, getting this right makes the rest fall into place.

This is followed by a rough rendering of the remainder of the sculpture, always viewing the figure from different angles to iron out any flaws.  As the scale of the figure has been set, small details such as buttons and medals are sculpted as separate parts to be added later.  The rough rendering of the figure is shaped, adding plus removing over and over.  I then cover the figure and try not to look at it for a few days, this way when I return to work on it imperfections are noticed that were missed before.

Once happy with the layering of the clothes texture, seams and buttons are added. Going back to the face the roughly sculpted facial hair is worked on.  It was decided to extend the beard in order to ensure the depiction that the Sikhs maintained uncut hair while fighting.  Returning to research and references, Sikhs would have maintained their beards tied up, to stop them jamming in their rifles and to be manageable.  The look of a longer beard fits well with the image of the Sikh.  But I was not happy until my fifth attempt at the facial hair – “that will do” is never an option especially when the model is to last forever!

Finally the medals are added tweaking the little bits that may not be seen by many but I know they are there.

A much larger sculpture could have been created but even this would not represent the sacrifice made by these men.

I see the World War One Sikh memorial as a dignified reminder of the role played by Sikhs to which we are all indebted.  In future, those who look upon it must surely feel the same sentiment.