As we gear up for the official launch of the WW1 Sikh Memorial on Sunday 29th March, we thought we’d share with you some new artwork and a guest article from the “Sikh Chronicles” publication we are releasing on the day.

Jag Lall is an artist we regularly work with – and below details how he created the look of the Subedar for the Sikh Chronicles.

The publication is being released exclusively at the memorial launch event – so book now and ensure your copy at this historic event. 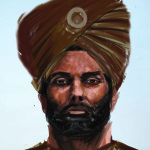 It was a tremendous honour to be asked to depict the image of the Subedar for the cover of “The Sikh Chronicles” publication.  The whole look and feel of the Sikh soldier, in bronze and standing proud at the National Memorial Arboretum, is one which will convey an inspirational message to future generations of the role of Sikhs during the Great War.

In trying to create an artwork for the front cover illustration which provokes strong emotions, many concepts were drafted and discussed.

At first the ideas revolved around a dynamic scene, perhaps an action shot similar to other works I’ve had the pleasure of creating for the Sikhs at War project.

Having covered various action shots ranging from one-on-one fighting, a cavalry charge, of soldiers in the trenches etc; I decided to try and take the dynamism up a notch and create a draft of a Sikh soldier leaping to take on a German tank.  Whilst the art was energetic it was not a realistic moment of the war, nor was there much of a profile on the Sikh soldier which was the focus of the publication and memorial.   Those draft forms are shown opposite, and give some idea of the creative but highly ambitious concept.

We decided instead to focus directly on a Sikh soldier – unidentified in name but personable in appearance, to show the pride and integrity 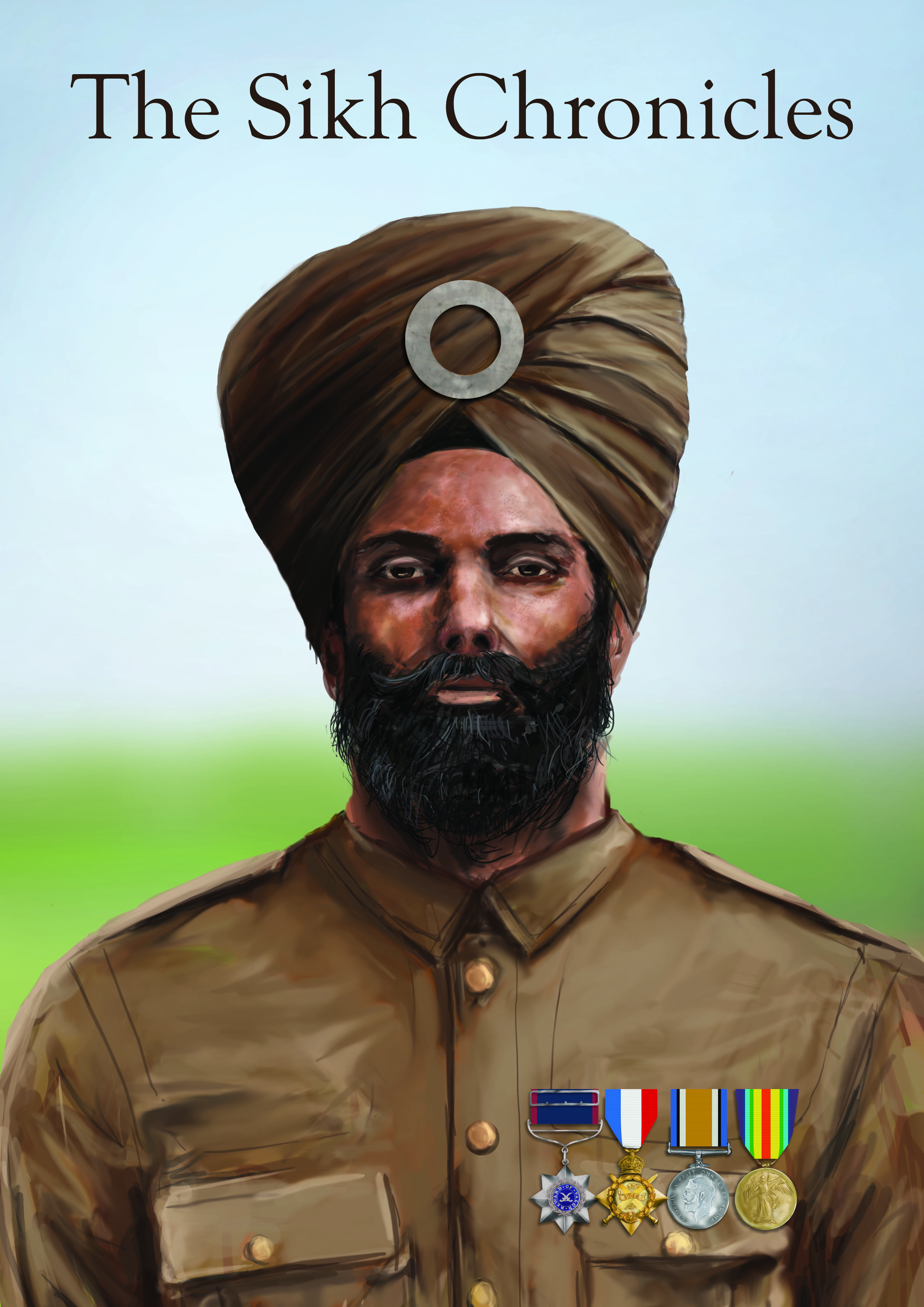 of one who had survived the war with medals pinned on his chest – but with a hint of sorrow and reflection upon the human tragedy of conflict he had witnessed.

The first several drafts had the soldier looking straight on at the viewer but in doing so this lacked depth.   Also in the first draft the beard was too short with a trim look so I corrected this by replicating a much more similar style to what the Sikh soldiers had in WWI.  I looked at bringing a slight tilt to the angle by having the soldier look like he was standing to attention, perhaps after receiving a new medal or having met a General.  This brought his head and chin up a little and made the image look less flat and one dimensional.   In a way it helped give more character to the soldier and depicted a scene which the viewer should hopefully think about.

I felt the eyes were an important feature in this artwork and I wanted to bring emotion and substance to them.  Whilst there is strength in the soldiers’ eyes there is also a somewhat sombre look in them too, a moment of remembrance of the reality of war he had witnessed.  In turn I wanted the viewer to try and feel the same sentiment, of not forgetting the sacrifices of the Sikhs.

It was important for me to show some tainted joy, to bring emotion to the piece and show the human element by creating a strong sentiment.  I did this through the use of the colours I chose and in slightly discolouring the medals to convey grit and to symbolise the sorrow that ties in with war.

I feel in many ways that this cover art is a reflection of the pride and admiration we have for our Sikh soldiers coupled with the contemplation for all that they witnessed and endured.  Hopefully it – and the memorial – will get people thinking and remembering the sacrifices of our ancestors.

Jag Lall is an artist who has created visually engaging images for comics and exhibitions.  Visit www.jaglallart.com for more.