02/11/2014 11:19 pm Leave a Comment
In this second post on how to fund heritage projects, I want to give an indication of how WW1 Sikh Memorial Fund was successful by publishing some of our donor stats and using this to show how you too can build up an audience for your own campaigns.

We took to Kickstarter to create a grassroots campaign, and this ran for 28 days to raise the requisite £20,000 for the memorial.  This figure was a budgeted one which covered the cost of a memorial, a souvenir publication and a launch event.

The strategy saw us conducting a lot of work pre-Kickstarter – 7 months worth of planning, discussion, engagement and finessing the fundraising and the goal for a memorial.

And as previously stated in the first post, lesson 1 for a successful campaign is to develop a good idea and prepare.  You simply cannot do enough preparation.

Looking at our resulting donation pool, we found that we had 153 donors on the Kickstarter site.  Of those only 1 fell through at the deposit stage.

And out of all the donors, 27 were non-Sikh.

I haven’t broken down the male to female ratio, it’s simply time consuming … but from a guestimate it looks like a quarter of donors were women.

So how do you build up an audience?  First you need to create traffic. 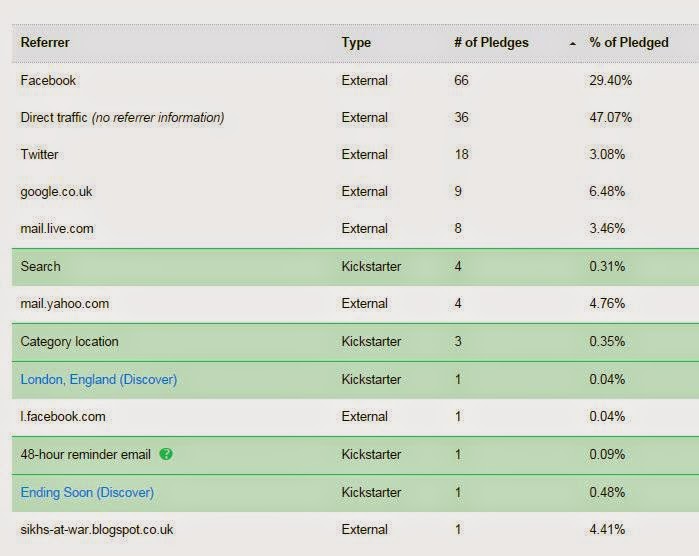 The table below shows where our traffic and donors came from – perhaps not surprisingly Facebook is a fantastic way to find audiences and encourage donors.

The more people you have within your network who can share and encourage other donors the better.

Twitter didn’t give us the kind of response from potential donors we hoped, but if you think about how you use social media, whole Tweets are a great way of spreading the word and cannot be discounted, giving people a direct link to follow through and back a cause works better when it’s personal.

In keeping with this, we were surprised and glad our direct mail campaigns to our networks of friends and colleagues too helped get us donations – and these personal connections contributed nearly half of the funding.

So how do you create traffic?

Simply posting/tweeting/emailing your fundraising link will not do – more often than not people will just get annoyed or put off by you asking for money.

Gathering donors and supporters is about strategy and planning – a lot of the ground work I recommended you do early on comes into play now.

Speaking to people about your good idea, building coalitions and support groups will ensure that when you launch you are able to maximise your campaign presence and get funders.

It’s not simply just about having a good video and catchy images to lull people in – although that might help drive traffic to your fundraising page.

But why do people donate?  By feeling they are going to be a part of something special, something memorable, something they can feel good about.

And how do you encourage people to donate increasing amounts?  By bringing them into your process and making them a part of it.