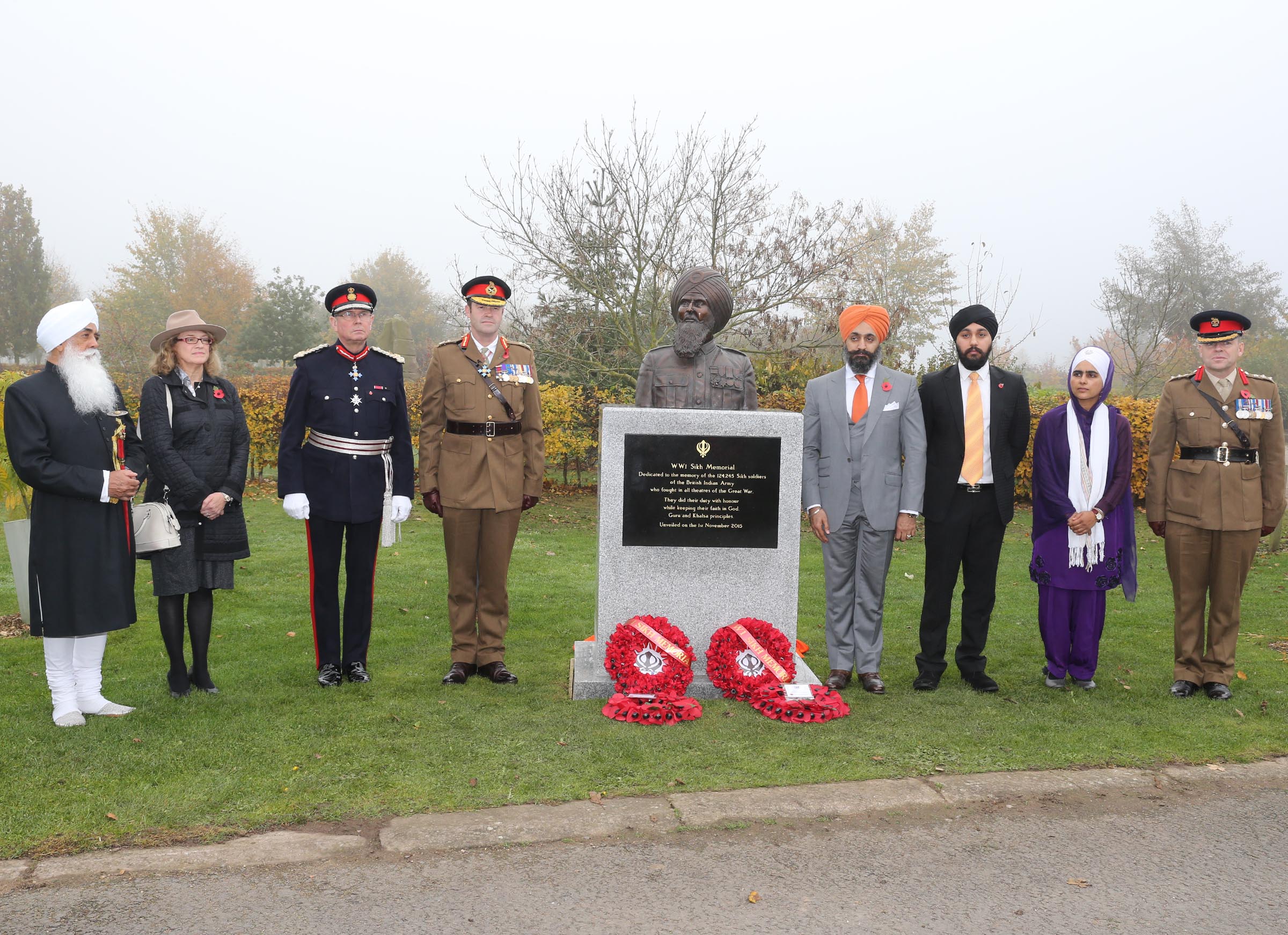 The UK’s first national Sikh memorial in honour of those who fought during the Great War has been unveiled at the National Memorial Arboretum in Staffordshire.

Speeches were made honouring the sacrifice of the 126,245 Sikhs who fought during the Great War – before a parade led the congregation to the unveiling site.  An ardaas prayer was recited and after the traditional Sikh war cry, a one minute silence was observed by the 300 people present.

The memorial is the first of its kind – a statue commemorating the bravery and sacrifice of Sikh soldiers during the conflict. The Sikh contribution is remarkable, as despite being only 1% of the Indian population at the time, they constituted 20% of the British Indian Army and were represented in over a third of the regiments at the time.  For their heroism, Sikhs received 29% of all Indian Orders of Merit awarded during the war and 24% of all Indian Distinguished Service Medals.

The memorial was uniquely funded through a grassroots campaign by the “WW1 Sikh Memorial Fund” on the Kickstarter website.  More than 200 people from across different faiths and backgrounds contributed from £1 to £1,000 to fund the memorial.  The monuments creator and charity chairman Jay Singh-Sohal says: “It’s been a long time coming, but we finally have a dedicated memorial which will stand the test of time and attest to future generations the gratitude we have for the sacrifice and valour of our forefathers.  This memorial is mindful of our glorious past and will inspire future generations to undertake public service as confident and proud British Sikhs.  It is already attracting visitors from abroad, and will be a place of pilgrimage for people from all sections of our society to recall the bravery of a martial race that fought for Britain simply because it was their duty to serve and desire to seek glory in battle against tyranny and oppression.”

Major General Patrick Sanders, Commander of the British Army’s 3rd Division says: “It’s a hugely significant event, the record of service of courage and sacrifice of Sikhs during the First World War is really second to none.”  Further adding: “The Sikh community understands how the sacrifice, the courage the martial spirit that their forebears have shown is very consistent with the traditions of today.”

The memorials patron is the Virdee Foundation, a charitable organisation that seeks to empower young people.  Its Chairman Peter Singh Virdee says: “We need to support out youth not only through monetary means but more importantly with knowledge, guidance and intuition.”

The monument team will now look to inspire the creation of more Sikh monuments up and down the country, as well as encourage other Asian communities to create their own.