** Our immense gratitude to Don Nicolson from Olde Edwardian’s for providing primary source material used within this article.**

It is a rewarding journey to research into a history, simply to discover new and fascinating connections. It can be a true delight when one interesting thread of thought, once tugged at, unravels a whole new web of untold stories.

This is just what happened during a Christmas luncheon I attended in Westminster. I sat down opposite someone who had a strong connection to my interest in Saragarhi. Having mentioned I had written a book and explaining what it was about, my acquaintance revealed his grandfather had served during Tirah! He would have certainly crossed through the Samana at the time of the epic battle and would have seen the small ruined outpost which was defended by 21 valiant Sikhs.

I came away from the lunch with a new thread to pull at, and as I pursued this link I came across something I had yet to discover – a wonderful connection between Saragarhi …and Sheffield! This story is being told below for the first time, and I hope it will trigger more lost connections (and hopefully more primary accounts) to be found.

On the frontier, British soldiers and officers formed a part of the Tirah Expeditionary Force, which was sent in 1897 after the Samana posts were attached to subdue the unruly tribes who had been incited by their Mullahs to wage holy war. 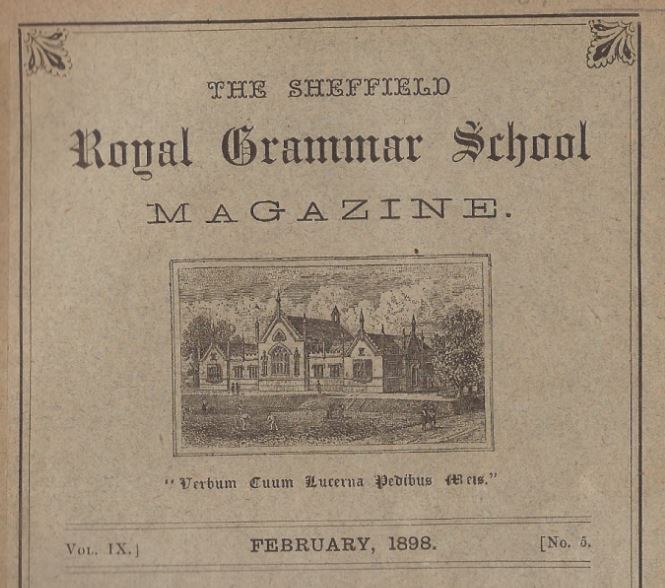 One such young officer was 22 year old Bernard Haslam of the Royal Engineers who wrote to his uncle about the experience and of what he saw. The uncle in question was the Rev. A.B. Haslam the headmaster of Sheffield Grammar, and extracts of the letters written from Fort Lockhart in August and September 1897 were duly published in the school newspaper.
The account begins on the 26th July 1897 with a brief description of the Samana, and the revelation that “I shall, I suppose, mess with the 36th Sikhs”. Haslam would be dining with the Sikh soldiers. He further adds “I am looking forward to a glorious time out there!.”
Some weeks later on the 7th August, Haslam arrives at Fort Lockhart after a three hour journey on ponies, having set out from Hangu at 5.30am.
A week later he writes about the mountain conditions making everything damp but there is pleasantry also. “I had a great game of hockey yesterday” he writes. “Four of the officers of the 36th Sikhs and myself and some native officers and sepoys from the regiment were playing. Many of these played with legs bare to the knee, and some with bare feet. They were uncommonly good…”
By the 29th August, things are hotting up on the frontier with the nearby Shinwari post taken and burnt. Our officer describes how the Sikhs are garrisoning other posts and these are “far stronger” because of it, more so than the posts manned by border police – tribal levies of Pathans that often fled or refused to fight when confronted by their brethren.
Let us now turn to the fateful day of the 12th September, when Saragarhi was attacked and destroyed. Haslam  was there and describes the dramatic events as thousands upon thousands of enemy tribesmen attacked the frontier post of Gulistan. Here is the extract in full: 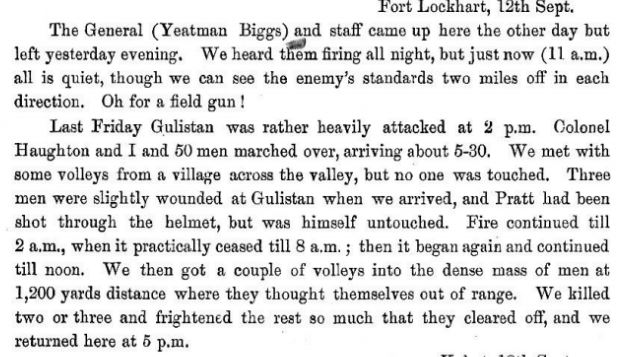 Thereafter, Haslam gives another letter with further details of the events as he saw them at Saragarhi. This below is a remarkable first hand account which gives some unbelievable insight into what the 21 Sikhs at Saragarhi faced against the 10,000 enemy they stood against.  It verifies that: i) the commander Lt Col John Haughton tried to relieve the garrison ii) helio messages were still being signaled up to the point that the post was overrun iii) one Sikh sentry killed 20 enemy, with 200 in total believed killed (the actual number is 180). 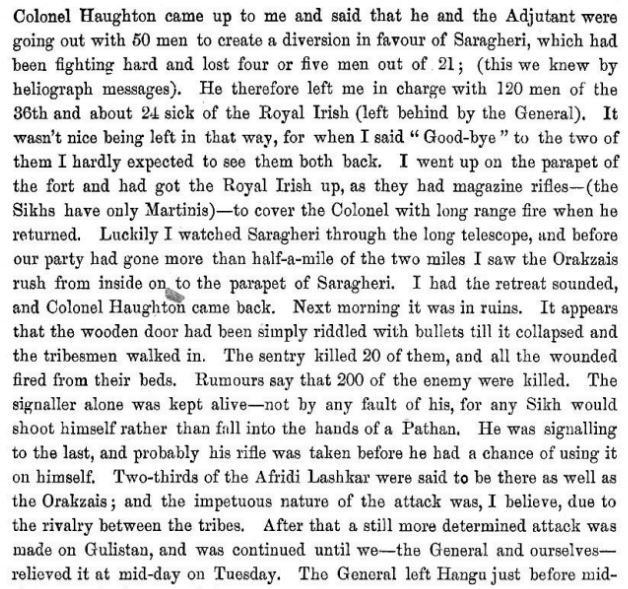 But this account also presents a couple of factual inaccuracies from the writers point of view, which are nonetheless explainable. Firstly, he did not see the wall on the opposite end fall in from where two tribesmen were digging (this was observed from Gulistan). Secondly,  the idea of the tribesmen walking in sounds too casual when we know there was hand-to-hand fighting with those few Sikhs remaining when the post was rushed for the final time.
Finally, the account given of what befell the signaller Gurmukh Singh does not clear up what exactly happened. In evidence presented in my research (published in Saragarhi: The Forgotten Battle) I suggest he did indeed shoot himself rather than fall into enemy hands and this is based on the account of senior officers. But this version states he was “kept alive” and that it is “probable” his rifle was taken before he had a chance of using it on himself. Does this mean he fell prisoner? Or his weapon was somehow lost? Or pulled from him, perhaps in a fight? There is still much left unanswered, which leaves a mystery of exactly what happened, yet we can make educated assumptions with the sources we have based on what we do know of the Sikh soldier of that time.
This is a fantastic find, an historic eye witness account that truly gives more details about the fateful events on the Samana – and it will no doubt help in our factual understanding of what happened at Saragarhi, and hopefully inspire greater acts of such devotion to a just cause.
The fate that befell Bernard Haslam was akin to that of many other young British men. After his service on the frontier he would find himself fighting for his country during the Great War. He died not in India or the Western Front but modern day Iran, on 26 August 1918 aged 43 during the Persian campaign. He is named on the Tehran Memorial, details of which can be found from the CWGC website here.
Finally, I end with a request to readers who have connections to Tirah to get in touch. I’d love to hear more such stories and hopefully continue to share this largely forgotten but highly relevant history with our wider audience.