Turbans of the British Indian Army

Recent posts on popular social media groups such as “Great Sikh Battles” got me thinking that a blog about writing this post about the Turbans worn in the British Indian Army.

As the author of  “Turbanology: Guide to Sikh Identity”  it irks me that when talking about the Sikh contribution – researchers and writers often make the mistake of counting anyone who is a ‘Singh’ or has a turban as a Sikh, thus exaggerating the numbers of those who served.  This doesn’t help our understanding of the conflict nor the sacrifices of our ancestors.

The turban is fundamentally a part of Sikh identity – it encases uncut hair on the head, and for men is complimented by an unshorn beard.  The hair is a sacred symbol, one of the 5 K’s and which all Sikhs keep in accordance with the will of God.

But the turban is not a solely Sikh symbol – it is associated with the east and shared with many other faiths and cultures across Asia.  This is best seen in India where the turban is worn by many non-Sikhs.

Turning to the period of Empire, Sikh soldiers were distinguishable by their turbans and uncut beards.  But all British Indian regiments embraced the turban as the primary ceremonial form of regimental headdress worn by all ranks regardless of faith.  Even British officers donned the turban.

During conflicts such as the Great War, many Indians would switch their turbans for helmets for combat – but the Sikhs were afforded the respect and dignity of always maintaining their dastaar and thus their faith and identity was represented even in battle.

But when we see images of these conflicts, many are confused by who the turban-wearing Indians are, so this blog is designed to shed light on this – and we can do so by looking at the style of turbans in question.

So what were there different turban styles.  Here are some examples: 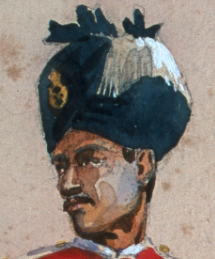 British Indian regiments during the time of Empire were organised on a class-based system.  While some were solely Sikh, Rajput or Brahmin regiments – others had a mix of squadrons or companies of different races.

For example – the 36th Sikhs, famed for it’s defence of Samana and heroics at Saragahi, was a regiment based wholly of Sikhs.  While the 27th Punjabis, who achieved battle honours in China, Afghanistan and Burma; was a mixture of Sikh, Hindu Dogra, Punjabi Muslim and Pathan companies.

Sikhs were further organised into: Jatt, non-Jatt, Lobana, Mazbi & Ramdasia squadrons or companies.  This was not because the British embraced the caste system but rather because of the prowess in various arms of the classes.  We will leave further discussion of this to a future post.

While turbans are not the same in how they are tied, we can certainly see similarities in how tthe various races tied their turbans which lends us to be able to analyse photos and say with some credibility who they belong to.

If you have any real images of British Indians in turbans please do share on this post thread, and let’s see if we can spot which race the soldiers belong to.