We continued our trip in India with a visit to Amritsar, the holy city of the Sikhs. It is well known that the city is home to Sri Harimandir Sahib (the “Golden Temple” herein GT) and Sikhs make regular pilgrimage to it to take a dip in the holy water. It is also known that opposite the most sacred of sites for Sikhs is the Sri Akal Takht, the Sikh parliament if you like, where political edicts governing the faith and community are discussed and issued.

But Amritsar is a special place for many many more reasons, for the city also hosts a wide variety of shrines and sites associated with Sikh history, from the recently restored Loh Garh fort built by the 6th Guru Hargobind Sahib ji in the mid 17th century to defend Amritsar, through to the locations within the GT complex in which Sikh warrior saints Baba Duleep Singh ji and Baba Gurbakhs Singh ji laid down their severed heads AFTER battling on whilst decapitated against Mughal forces! 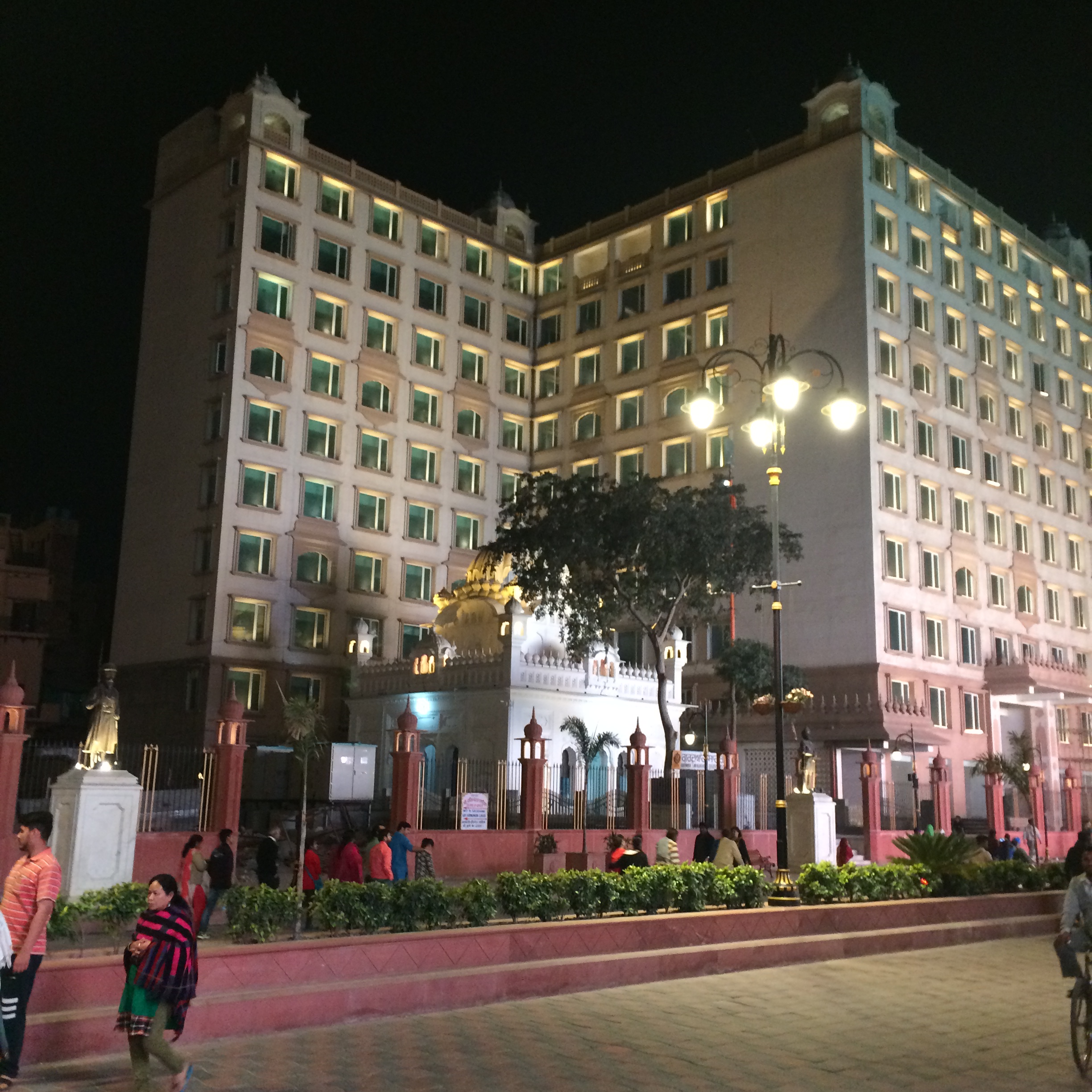 Many visitors to the holy city will not know of the significance of another memorial shrine built in the heart of Sikhdom. This is the Saragarhi Memorial Gurdwara (seen to the left). It is now dwarfed by a hostel for foreign visitors built around it, a travesty as the memorial was originally placed in a nice garden (as was the one at Ferozepur which is still maintained). But there should be no excuse to not know about or visit this place – it is right opposite the main Saragarhi car park which most visitors use!

It’s sad to see this memorial shrine in its current state and the proximity of other buildings on the new Heritage walkway which leads to the GT. My only hope is that the authorities, who are still undertaking some building around the new walkway, might use the empty land to the left of the Gurdwara to create some greenery where visitors can sit, discover and contemplate the bravery of the Sikhs on the Samana in 1897.

The Saragarhi Memorial Gurdwara has a fascinating history which deserves wider recognition. It was unveiled in April 1902, during the special time of Vaisakhi when the Khalsa brotherhood was created by Sri Guru Gobind Singh ji.  Vaisakhi is a time of gathering for Sikhs, to become like the Guru and take initiation into the Khalsa brotherhood and to abide by a code of  ethics and conduct (for more info I recommend reading Sikh Code of Conduct).

It is not surprising that the unveiling took place at this time, it’s a simple and effective information campaign (more in a future blog post). The British were seeking to use the battle to inspire greater contribution of Sikhs in the British Indian Army, particularly on the frontier. Making the connection to the founding principles in the creation of the Khalsa by opening the memorial Gurdwara at this time created a strong sense of Sikh belief and empowerment – for the use of the British. But how useful it indeed proved, when the Great War erupted 12 years later. 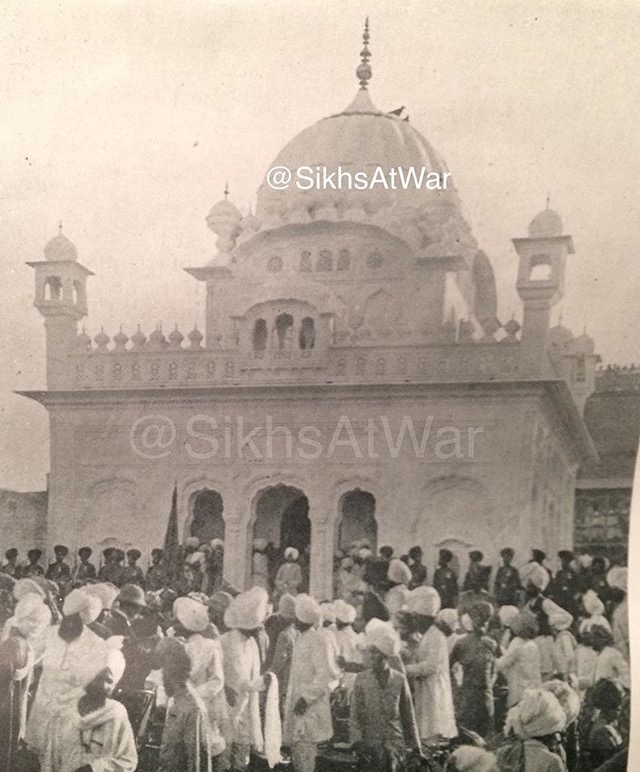 The memorial unveiling in April 1902

With this in mind then back to the unveiling (seen left), the Commander in Chief of Punjab General Sir Arthur Power Palmer, unveiled the monument saying that it was created to show the  “spontaneous appreciation of the gallantry of a representative detachment of the Sikh nation, proving that they possess one of the finest of soldierly characteristics – namely that they prefer death to surrender.” The unveiling was attended by dignitaries and a guard of honour of the 36th Sikhs was formed.

The General finished by saying that this memorial was: “erected at the headquarters of the Sikh religion, in order that as long as the British rule lasted the brave Sikh soldiers of the King might realise that their deeds would never be forgotten.”

I’m pleased to say that in Britain today, through the work we’re doing with the British Army, we have put remembrance of Saragarhi and how it can inspire acts of public service back onto the agenda – read more about Saragarhi Day 2016 here.

The memorial contains tablets on each of the four walls, and much like the Saragarhi monument at Ferozepur, they are each written in English, Punjabi, Hindi and Urdu. On the Amritsar tablet, the inscription reads: “The Government of India have caused this memorial to be erected to the memory of the twenty-one non-commissioned officers and men of the 36th Sikhs whose names are engraved below as a perpetual record of the heroism shewn by these gallant soldiers who died at their posts in the defence of the frontier fort of Saragarhi on the 12th September 1897 fighting against overwhelming numbers thus proving their loyalty and devotion to their sovereign the Queen Empress of India and gloriously maintaining the reputation of the Sikhs for unflinching courage on the field of battle.” 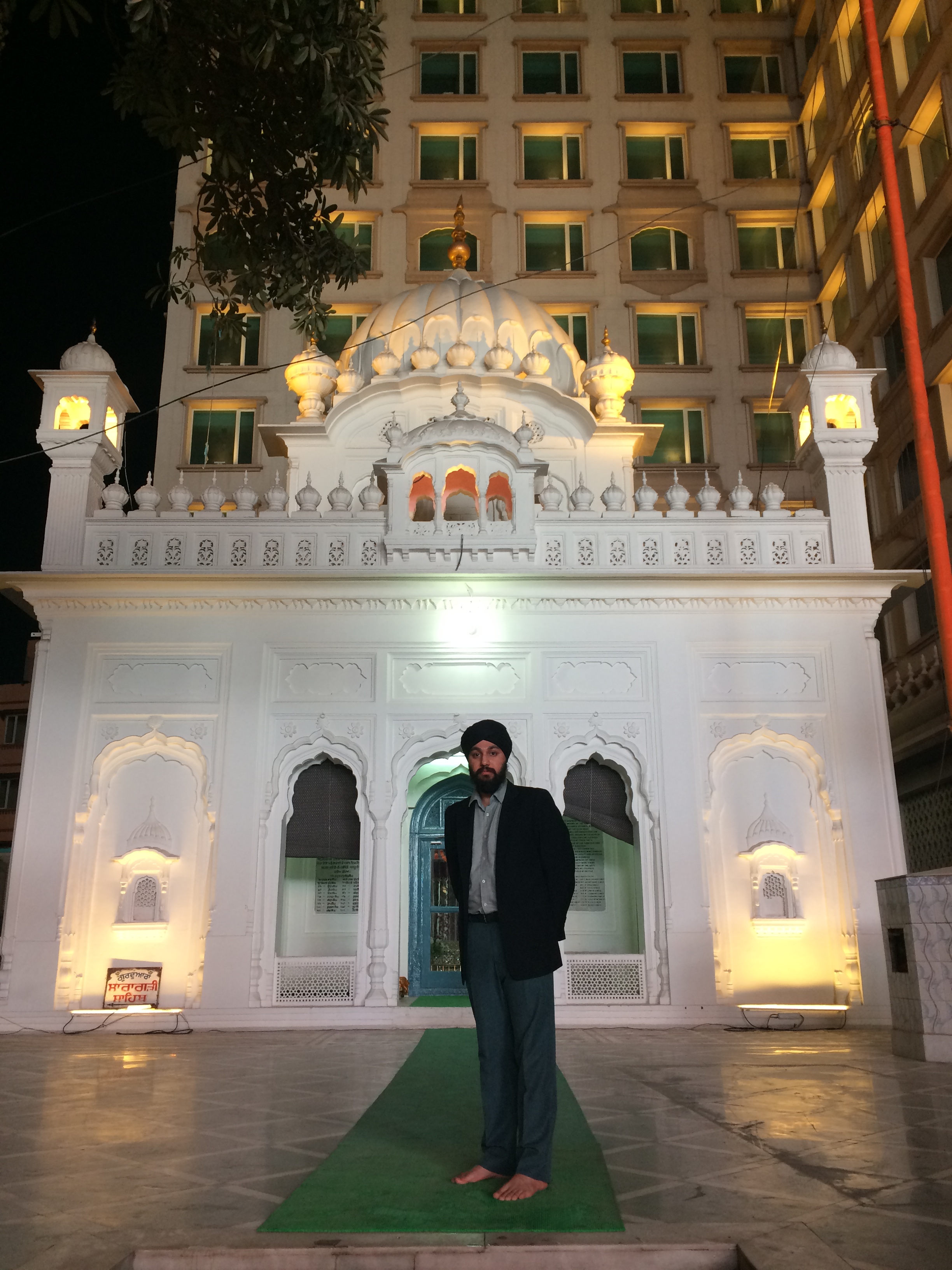 Some observations on the wording on the tablets:

1 – explicit credit given at the onset that the memorial was funded and built by the Government of India – British India
2 – stating of ‘loyalty and devotion’ to Queen Victoria, certainly not the motivating factor behind their heroics so we can accept this statement as part of the information campaign at the time to show how brave and loyal men should behave towards the Crown. It worked, and this is seen in the ways the native Raja’s and leading Sardars worked to prove their loyalty to the government – we’ll detail more on this in a future post.  BUT this sentiment towards colonial India is now a contentious one which many Indians would not warm to
3 – the belief that in death the 21 maintain the reputation of the Sikhs ‘for unflinching courage’ is a strong sentiment which cuts to the core of the Khalsa spirit, the belief in standing for a just cause and fighting (much like Baba Deep Singh and Baba Gurbakhs Singh, mentioned earlier) against the greatest of odds. This can and does inspire Sikhs to serve the greater good.

I end by sharing my experience of visiting the memorial and speaking to the granthi (priest) on duty at the time. He was very warm and even made us a nice cup of tea while we worked!

We also managed to get enough of a wifi signal to conduct our first foreign Saragarhi Live! You can view the clip of me explaining the memorial via this link here or clip on the photo to the left.