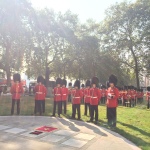 Recently I had the pleasure of attending a special memorial outside the Ministry of Defence in memory of the “Tally-Ho” Victoria Cross recipient Brigadier General John Vaughan Campbell, one hundred years to the day after he won the award for conspicuous bravery.

The ceremony at Victoria Embankment Gardens, attended by senior British Army officers, soldiers from his regiment and his descendants, the officer – who was born in Westminster – was remembered for his gallantry and service during the Great War with a special paving stone.

As an acting Lieutenant Colonel commanding the 3rd Battalion Coldstream Guards in 1916, Campbell fought in the Battle of the Somme. On 15th September 1916 he took personal command of the third line of guardsmen at Ginchy, France after the first two waves of his battalion were shot down by machine gun and rifle fire.

He rallied his men by blowing a hunting horn and shouting the traditional hunting cry of “Tally-Ho”, by which he also earned his nickname.

His VC citation states that he then led the charge against enemy machine gun positions, capturing the guns and killing the personnel. Later in the day after consultation with other unit commanders he again rallied the survivors of this battalion and at a critical moment led them through a very hostile fire barrage against the objective. He was one of the first to enter the enemy trench.

The Lord Mayor of the City of Westminster, Cllr Steve Summers unveiled the commemorative stone alongside a member of the Campbell family. The stone was then blessed by the current chaplain to the 1st Battalion Coldstream Guards, Reverend J. W. Caldwell. The hunting horn that Campbell blew in battle was sounded as the Band of the Coldstream Guards played the National Anthem.

The Victoria Cross paving stone for John Vaughan Campbell is the fourth of 12 to be unveiled in Westminster.

In total 628 paving stones will be laid across the country, in memory of all those awarded a Victoria Cross throughout the Great War.