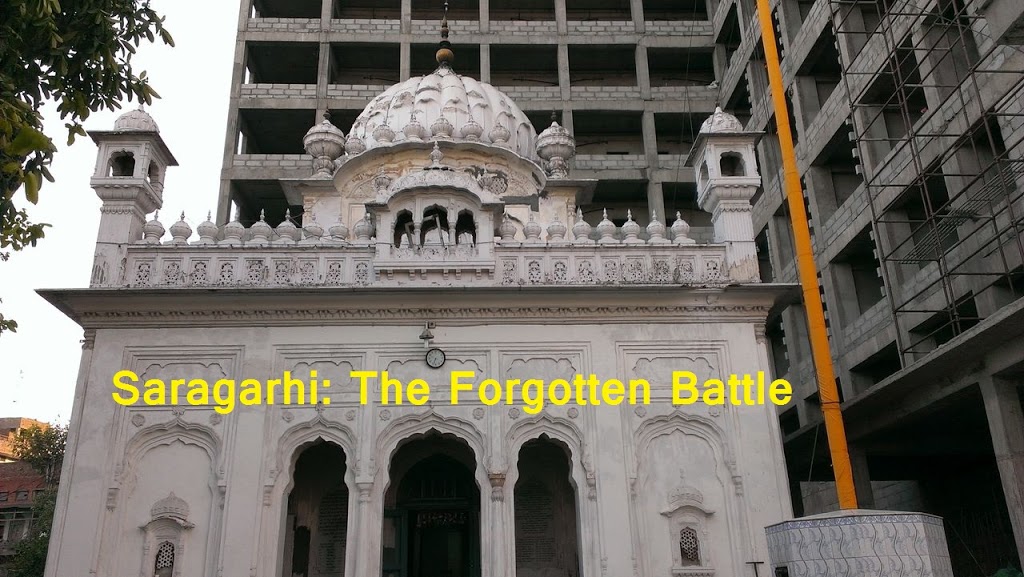 It was with much sadness that I saw the below scene of the Saragarhi memorial in Amritsar. 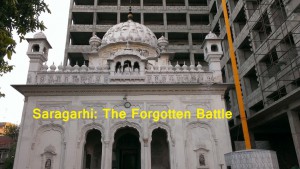 This was the memorial created after the battle in which 21 Sikhs heroically stood to the last against 10,000 Afghan tribesmen on the frontier.

Their last stand, chronicled in my next book, cemented the reputation of Sikhs as brave and loyal soldiers of the British Empire.  A reputation still remembered to this day, albeit not as much as it should be.

This post is about the decline of Indian (specifically Punjabi) heritage.

The memorial Gurdwara was unveiled on 16th April 1902 by General Sir Arthur Power Palmer, the Commander-in-Chief, who said:  “The memorial is the outcome of the spontaneous appreciation of the gallantry of a representative detachment of the Sikh nation, proving that they possess one of the finest of soldierly characteristics – namely, that they prefer death to surrender.”

The names of the 20 Sikh soldiers under Havildar Ishar Singh were written onto plaques outside the front door leading to the Guru Granth Sahib, the names were to:  “…be kept as an example to others, in order to show how brave men should behave when facing fearful odds.” said Power Palmer.

So it’s very sad then that the memorial is falling into a dilapidated state.  It needs repairs and freshening up, as does the grounds around it.
But rather than preserving this memorial, the SGPC (in charge of Sikh shrines) seem more interested in building accommodations for foreign devotees (Sikhs and non) who visit the holy city of Amrtisar.  The building which looms over the memorial is such a hostel, which will no doubt when complete dwarf the Saragarhi memorial.
This is a surprise, as in recent years Saragarhi seems to have made a resurgence as a story of bravery, with Sikhs trying to bring back awareness of it through various means, the SGPC commissioning artwork and a cartoon book on the story being released.
But the state of the old memorial is an example of Punjab losing it’s physical heritage, which are being bulldozed and replaced with western-friendly facades.

In this instance, the memorial hasn’t suffered that fate (yet) – but awareness of historic actions which the Sikhs were involved in are in danger of being forgotten if not becoming merely political ploys for the establishment.  The lessons they contain and the context of their history are seen as no longer relevant.

Power Palmer, in 1902, also stated that the memorial was erected at the headquarters of the Sikhs so that:  “…as long as the British rule lasted the brave Sikh soldiers of the King might realize that their deeds would never be forgotten.”
Perhaps its because of this connection to Empire that the memorial has been forgotten about?  Can Sikhs no longer feel proud of their contribution during the history of British India?  Is it too difficult given the independence movement?  Is it too embarrassing for ruling elites to propagate?  Or simply a fruitless endeavor?  Or do the simple folk who have little reading of such history simply not care?

I, for one, take a lot from the story of Saragarhi – but then I am a British Sikh and feel a connection between it and the subsequent heroics during the World Wars and then the migration and integration of Sikhs in Britain thereafter.

Whatever the outlook, heritage groups are missing in this equation – where are they?  Are there any in India who’ll work to fund repairs at the memorial?  The UK-based heritage groups seem more interested in posh polo matches, is the story of Saragarhi becoming abused for others gain?  What about groups in the USA/Canada, where there are a lot of Sikhs?  I’d like to know your views …

My hope is that someone will take this post to heart to work to restore the memorial.  But the effort must come domestically within India, there is not much we in the diaspora can do – money is not the answer to everything, as Sikhs abroad seem to be thought of as cash cows by our Indian cousins.

Rather, Indians in India MUST work to protect our memorials, such as Saragarhi, for generations to come. If it was in my back yard, I would!

To conserve our heritage we must embrace it and radiate it’s significance to those who can see, feel and taste its presence.  The old adage stands, we shape our buildings and thereafter our buildings shape us.
I feel like I’ve done my part by writing a book about the factual story of Saragarhi and its significance, to be released in September 2013.

It’s now for others to take it and the story of Saragarhi to ensure it is not forgotten, but that the heritage connected to it is also not lost.