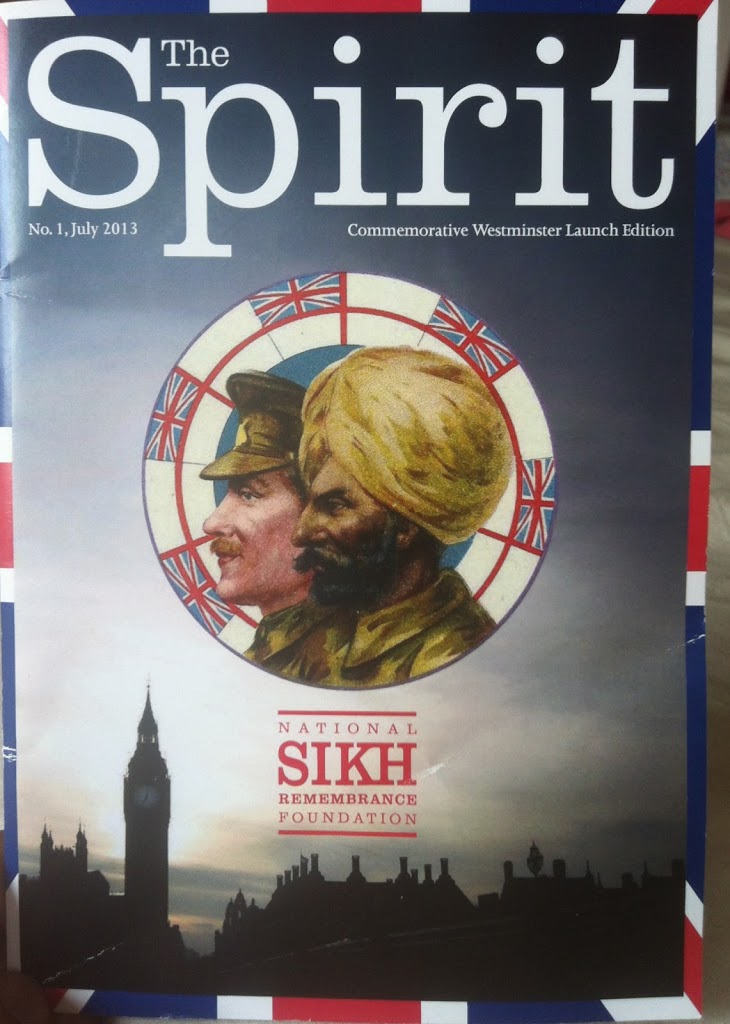 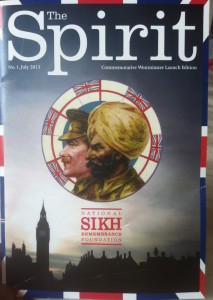 I had the pleasure of speaking at the launch of the National Sikh Remembrance Foundation yesterday (4th July).

The NSRF was launched by the Attorney General Dominic Grieve and Paul Uppal MP.

The trustees, including Cllr Santokh Singh Chhokkar, have done a fantastic job in setting up an organisation to work with the Royal British Legion and others in commemorating the Sikh contribution during the Great War.

Their commemorative launch magazine is on the left.

The launch was an excellent chance to hear from dignitaries about the Sikh contribution during the War, as well as speak to people about it too.

Below is my speech from the event.  If you quote from it please ensure you attribute it to “Jay Singh-Sohal”:

“As we head into the anniversary year commemorating the start of the Great War it’s important for us all to remember the contributions of the Sikhs AND to ensure their story is also remembered in wider society.
After all – our success today as British Sikhs is due to the historic and heroic contribution of those from the subcontinent who defended Britain and thereafter found a welcome home on these shores.
We can take immense pride as a community in the 150 years of British and Sikh interaction.  Particularly as Sikhs chose to serve in the Empire that had annexed the Punjab – they stayed loyal during India Mutiny and they fought on the unruly frontier with Afghanistan.
Alongside them there in Malakand was a young Winston Churchill – who said of them: “the Sikh will go on under circumstances which will dishearten and discourage his rival.”
If to prove his point – shortly thereafter at Saragarhi – 21 Sikhs stood firm against 10,000 enemy tribesmen.  Cut off from reinforcements and facing overwhelming odds– they made a gallant last stand – fought – and died – rather than surrender or flee.
In these frontier wars the Sikhs earned their spurs – cementing their reputation as brave, loyal and the staunchest of British Indian soldiers – before their need even arose in the Great War.
My forthcoming publication “Saragarhi: The Forgotten Battle” details this – and WHY they selflessly served Britain:  It’s because their martial creed as Sikhs fostered a belief in fighting for a righteous cause; embracing the will of God and – if need be – sacrificing their life for a higher purpose.
They reflected on the words of the tenth Guru Gobind Singh – in remembering WHY they fought injustice and tyranny.  It is our national anthem:
Supreme Lord, grant me this boon – That I may never fail in performing righteous actions.
That when I fight my enemies may I not be intimidated – May I be victorious.
With a consistent craving in my mind – May I ever utter Your praises.
And when my mortallife comes to an end – May I die fighting fiercely in battle.
Sikhs fought for the British – from the frontier to the fields of Flanders – because they were warriors.  They had sworn an oath to do so – because they believed the British Raj would benefit their people.  They heard stories of how the Guru had told of their coming and how it would spread the seed of Sikhi.
Whether that prophecy is true or not is insignificant …letters sent by Sikhs from the trenches of Europe to the sands of Mesopotamia show that those who fought for the British believed in it.
In retrospect we can see that service in Empire enabled the Sikhs to spread worldwide, doing what Sikhs do best – and creating – friendships, communities, places of worship, families, businesses … prosperity.
From British Columbia  to Hong Kong.  Tanzania to New Zealand – and all the places in between, you can always spot a Sikh!
We British Sikhs are the best example of this legacy –we’ve followed in the footsteps of our ancestors who served– and been honourable, honest and hard working servants of society.  Only rather than the battlefield we now make our mark in business and commerce; defending the interests of Britain by creating wealth.
Dare I say we even exude conservative qualities – of duty, tradition, and strong family values.
But along the way we’ve somewhat lost track of the need to tell others – in fact to boast – of the immense contribution Sikhs made in fighting to uphold the rights and freedoms of ALL.
As a British Army reservist – I welcome the launch of the National Sikh Remembrance Foundation to ensure this story is placed high in public consciousness– and educates a new generation – about the War and those who fought in it.
I leave you with the words of General Sir William Lockhart, who remarked after the battle of Saragarhi that: “may the heroic national spirit of the Khalsa continue and flourish, and in future wars may Sikhs ever be found fighting as trusty comrades side by side with their British brothers-in-arms.”
That they did – but let it not be forgotten.  Let’s ensure this spirit continues to be remembered –and inspires others to serve our country – with works that make the story of Sikhs At War resonate within all corners of society.
They did their duty – it is now time for ours.”
A video of the speech will be updated here in due course.