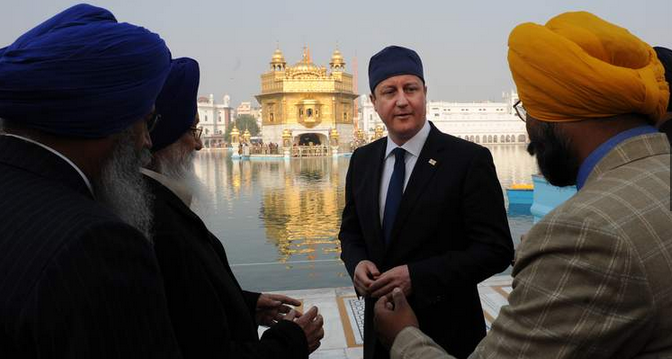 Sikhs believe that for anyone to visit and pay their respects at the site in Amritsar is a blessing – bathing in the sarovar (pool) around it washes away sins, bowing at the house of the Lord brings you closer to the Almighty.  This applies equally to all people – regardless of sex, race, creed, caste.  To symbolise this Harimandir Sahib has four entrances and is a place where any can find peace.

On this visit the PM also saw the langar (free kitchen) which feeds thousands upon thousands of people of all distinctions a simple vegetarian meal – a central element of the Sikh faith is seva (selfless service).

The PM also visited Jallianwala Bagh nearby, where in 1919 Brigadier General Reginald Dyer massacred hundreds of people who had gathered in a protect on Vaisakhi day.  Dyer thought it a major insurrection – how wrong he was.

Now you might wonder where this fits in with the historic context of this blog, which promotes Anglo-Sikh history during the Wars.  I’ll try to explain, keeping it short and succinct (so apologies in advance if this is too general):

Sikhs had been loyal soldiers for the British since the annexation of the Punjab in 1849.  They stood firm and loyal during India Mutiny in 1857.  And for their dedication and bravery were trusted to be sent to every arena of British conflict – from the North West Frontier, to China, to E Africa, to Mesopotamia.   During the Great War Sikhs fought in every arena the British did – including for the first time in Europe.

But Jallianwala Bagh changed the sentiment of the Sikhs – many of whom were butchered at the site.  It came just a month before the Third Afghan War when once again Sikhs were sent to Afghanistan in large numbers.  They served, but the mood had changed.  The British were no longer seen as the guardians of their lands, the decay of Empires was setting in and the Brits were becoming excessive and strong handed.  Not to say that these instances hadn’t happened before – but now a wider Indian audience became receptive to this form of injustice.  Sikhs would join the movement for a Free India in droves and be at the fore of the independence movement.

I would recommend Sikhs today read more into the events – and find for themselves how it resonates for them.  For me it’s an episode which marks the decline of the Raj because the British had lost their stronghold over the Sikhs – a relationship based on mutual respect.  It was the beginning of the end of the jewel in the crown, and many of those feelings continue to inform how Britain and India do business today.

There have been many questions about whether the PM should have apologised for the incident – I’m not a fan of politicians apologising for past historic mistakes.  But showing respect is a higher form of apology.  The fact that Mr Cameron made the effort to visit Amritsar and show respect at Sri Harimandir Sahib for me is more than enough (as many Indians may feel).

Journalistic bit
I shared many of these views with journalists who’d requested an interview yesterday on the visit.  I was also inundated by Sikhs trying to get on to the television to talk about it (a bizarre day when one is both subject to and object of media bids!)  BUT I was unable to go on due to commitments.

So I wanted to finish this post with some advise as many wanted to know how to represent the Sikh view in mainstream media.  It’s important to make mention here, as I feel some media outlets missed a trick by not speaking to identifiable Sikhs in the UK:

1 – I’m easily contactable so contact me direct if you require my expertise.  I have a strong social media and web presence and one of my numbers is easily reachable.  So you don’t need to be shifty or shy about how you got my number.

2 – Media are always looking for new, fresh, young voices on any issue (not just Sikh stories) – as long as they can articulate ideas.  So if you’re trying to pitch me your ‘community leader’ and I ask if they speak English don’t be offended, but don’t lie … I know everyone!

4 – Let’s be friends!  You don’t need a lawyer to get in touch, play with a straight bat.

5 – Engage!  There is one Sikh organisation (which doesn’t represent mainstream views) but is getting booked by many outlets.  It’s because they engage with media – this doesn’t mean sending out badly written press releases, but making contact with and keeping links with editors – and on a myriad of topics not just Sikh ones.

* Some might colloquially term the shrine “Golden Temple”, but is a western invention which has stuck, which one doesn’t like using.  Sikhs don’t pray in temples but Gurdwaras.